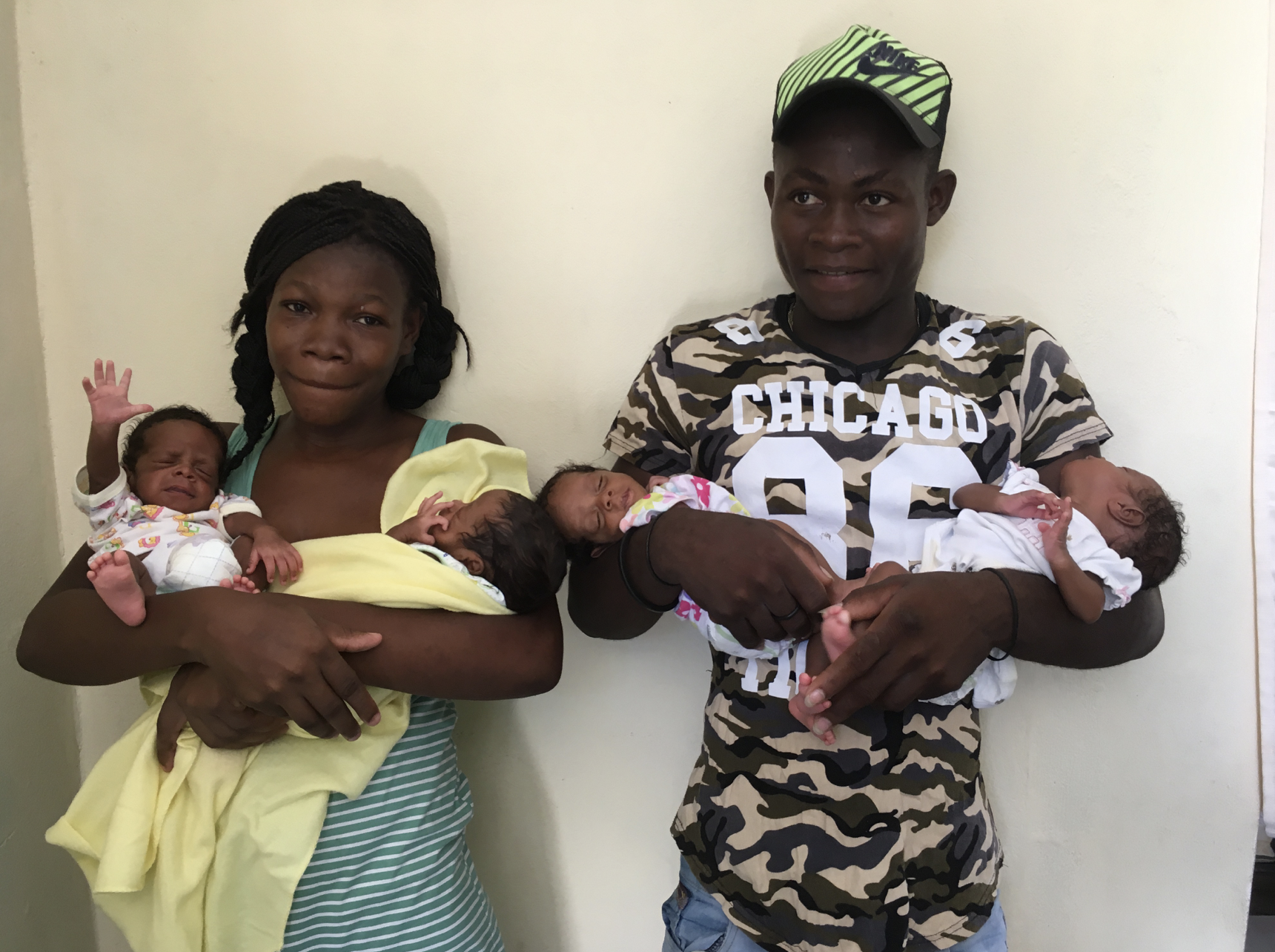 Ms. Dorisca Camicile is a 22-year-old woman who is living in Fond Parisien, Haiti with her partner. They recently had four healthy babies together. They also had one other child.

During her pregnancy, Ms. Dorisca  received only one prenatal visit at Hospital St. Croix in Fond Verettes. She was unaware that she was pregnant with quadruplets.  At her initial prenatal visit, the doctor informed her she was having twins. Camicile stated “ The way I felt was different”. She had no further prenatal care until the day she went to labor.

Ms. Dorisca had planned to deliver at home. “ I had my chart at the hospital and I planned to deliver at home, but since I had a lot of pain I came to the hospital”.  That day, Camicile described, “I felt pain in my feet and I came to the Hospital St. Croix and then the priest drove me to this Hospital Christ Pour Tous” (Fonds Parisiens). About having twins, “ It wasn’t a problem, I was suffering and God helped me to deliver and nurse Lapaix was there helping me”.

The biggest baby weighed 4 pounds at the time of birth.  Ms. Dorisca is breastfeeding her four infants as well as giving them baby formula. She is able to identify all of them. She named the boys Jack, Jacky, Jacob, and the girl Jageline . “The little girl was the third one to come out”.

Ms Edeline Lapaix, a  graduate of Midwives for Haiti,  delivered the quadruplets. Ms. Lapaix thought Ms. Dorisca was having twins. She recalls “ I thought it was two. After she had the first one, her abdomen stayed the same size and the baby was very small. I thought there was more than two. No sonogram had been performed during prenatal care or labor.   Ms Lapaix shared that, “There are many places around here to get prenatal care…Eau de Vie, Loving Child, Ganthier and the hospital where I work, Christ Pour Tous”. When asked how she felt about delivering a mother with that many babies, Edlyne responded “ I was a bit concerned because that was the first time for me. I had delivered mothers with twins before. Thank God the first one came in a cephalic presentation. The second one did too, and so on. I was happy about that.  When she came and I looked at her abdomen, I wasn’t going to admit her because she had not done an ultrasound. She had not followed appointments. With us even, with twins it could be complicated. But, then I examined her and saw the head crowning. If I referred her I would have to go with her to Port au Prince. I was the only one working that day. I had no one to replace me, so I had to deliver her. My objective was to have all of them well.”

Jessica asked about the placentas and sacs. Edlyne explained, “One placenta. They were each in a sac and after she delivered each of them, there was another bag of water.  Yes it’s rare!”

Edlyne went on to say she thought the gestational age was about seven months, 29 weeks and 6 days. “I put them skin to skin to warm them up and they become pink and cried. Two of them had respiratory distress. That’s why they referred them to Hospital Nos Petits Freres et Soeurs”.

“After delivery, I was so happy!! I was going around the yard saying, Thanks to Midwives for Haiti!”

Well, they are beautiful babies. Maybe next year we’ll come back for a follow-up interview….. and they willALL be walking around!!!!!!

5 things I learned over 5 years at Midwives For Haiti

Baby in the Bag