Baby in the Bag - Midwives For Haiti

Three weeks ago Rebecca Barlow and I wanted to recreate Frontier Nursing’s “baby in the bag” photo in Haiti. For those of you unfamiliar with the story, in the 1920’s to the 1960’s Mary Breckinridge established the Frontier Nursing Service in south eastern Kentucky. Small clinics and nursing posts were built in areas where there were no roads. Eventually they were able to refer to a small hospital nearby rather than putting people on boats, mules, and horses to get to a train to take them to Lexington. The clinics were staffed by nurse-midwives who traveled by horseback, and in addition to catching babies, they stitched wounds, gave vaccinations, and brought healing to the sick in the region.

Because the nurse-midwives always carried their supplies in a leather saddlebag that contained their starched white aprons, clean sheets, sterile instruments, cord ties, and gloves, the children of the region came to believe that all babies arrived in these bags. Sometimes they wondered why the babies stayed in there so long after the midwife arrived. 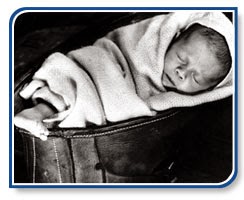 FNU’s Baby in the Saddlebag picture

Rebecca is a current Frontier Midwifery student and I am a graduate from Class 08. Right now in the house here in Hinche, Haiti we have midwives Kathleen Lutter and Susan Mitchell, from classes 84 and 85, respectively. Nurse-midwives frequently see how our mobile prenatal clinics operate here in rural Haiti  and draw the lines of similarities- mostly in bringing skilled care to where the people live- between Midwives For Haiti and the work of the nurse-midwives in the mountains of rural Kentucky.

Last year, a colleague of mine from my nursing faculty days, Violet Horst, contacted me. She had found some old leather bags at the University of Virginia’s nursing school that were probably used to carry supplies for public health nurses years ago. They needed to be cleaned up and the handles needed repaired. A kind harness-maker from Dayton, Virginia fixed them for her for no charge. Then she mailed them to Midwives For Haiti in Richmond, Virginia. She also fund-raised for BP cuffs, fetoscopes, and other midwifery equipment to put into them.

When they arrived in Haiti, they were given to our mobile clinic midwives. Four of them ride our aging pink Jeep  to sixteen villages around the central, as far away as a 2 hour drive, delivering skilled midwifery care to over 500 women each month. They received 4 of the bags. The other two bags went to Illa and Juslene, the two midwives that Rebecca trained last summer to do thorough assessments of mothers and babies before they leave the hospital here in Hinche.

Putting the bags in the hands of midwives seemed to bring Mary Breckenridge’s vision back to us and I really wanted to get a picture of a Haitan baby in one of those bags. We had a professional photographer here for just a few days and the morning before he left we asked him if he could help us get that photo. BD Colen said he would do it so we showed him the Frontier picture.

We decided that for various reasons, going to the hospital to take photos was not wise or practical and that bringing a woman and her baby to us was reasonable as we could provide the vehicle to bring them to the house. We called Illa and Juslene and asked if there was anyone ready to go home that would consent to coming here and having their baby’s photo taken. They called back soon and said “Yes, come and get the mother and baby”.

When they arrived at the house and Illa helped the very young mother out of the van, she said to us, “She’s a little embarrassed to come because she has no clothes.” The grandmother was carrying the baby while the mother climbed out of the van holding onto a brown towel wrapped around her body. She had a green blouse on and that towel, nothing else. And she was reluctant to sit because of course, having just had a baby, the back of the towel was bloody.

Haitian women frequently come to the hospital with the only nice outfit they have, get the dress or nightgown or skirt soiled during the birth process, put the soiled things in a bucket to take home and wait for family members to bring them something to wear home on the back of the motorcycle. They use multiple rags in their limited supply of underwear to keep themselves from soiling everything the lie on or sit on.  These rags do not get tossed. No, they get taken home to get washed in a bucket to be cleaned and dried and reused over and over. This mama’s skirt was in a bucket back at the hospital.

We have a house full of women and all of us swung into action. Kelah Hatcher, the daughter of a CPM volunteer, offered a pair of underwear, and in that we put a blue surgical towel for padding. I went upstairs to my still unpacked bags and found a blue and white shift I had bought, and because sending it back when it was too small seemed to be more bother than it was worth, had brought to give to someone. We sent her to the bathroom with the panties and dress. She walked out looking regal with a shy smile. 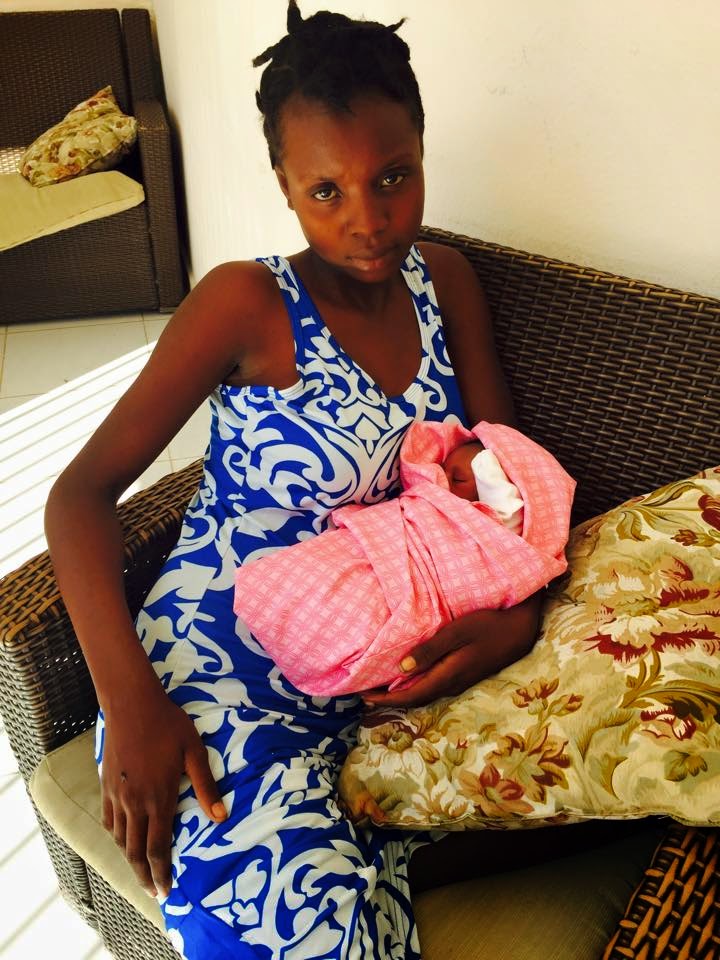 Because she also looked tired and uncomfortable, we hurried to get our photos. BD worked with lighting and settings in the house, Rebecca kept the baby wrapped well and the little boy just slept through it all. We got one photo with Illa and the baby and many of just the baby in the bag. 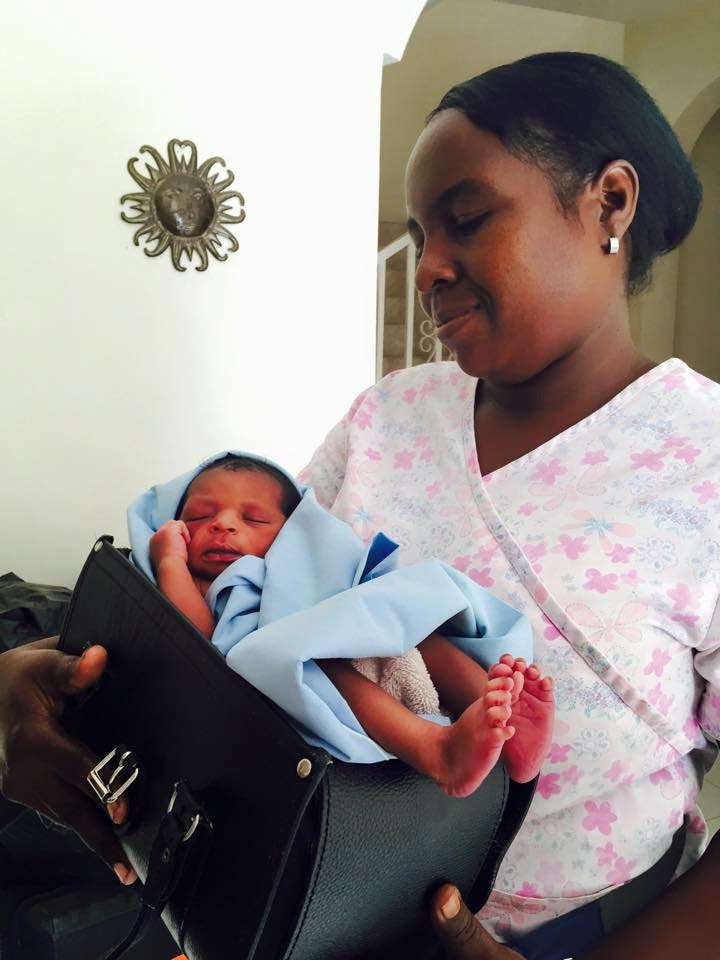 Although Emily said all the volunteer donated baby supplies had been depleted, we scrounged in all of our storage rooms and managed to find one cloth diaper, one onsie, a pink cotton receiving blanket, a blue sheet, a plastic bag for the dirty towel, another clean towel and a baby toy I had brought from my granddaughter. The grandmother is pictured here with the Hospital Albert Schweitzer bag we found to put it all in. It included a few goudes to pay for a mototaxi ride home when she was discharged. 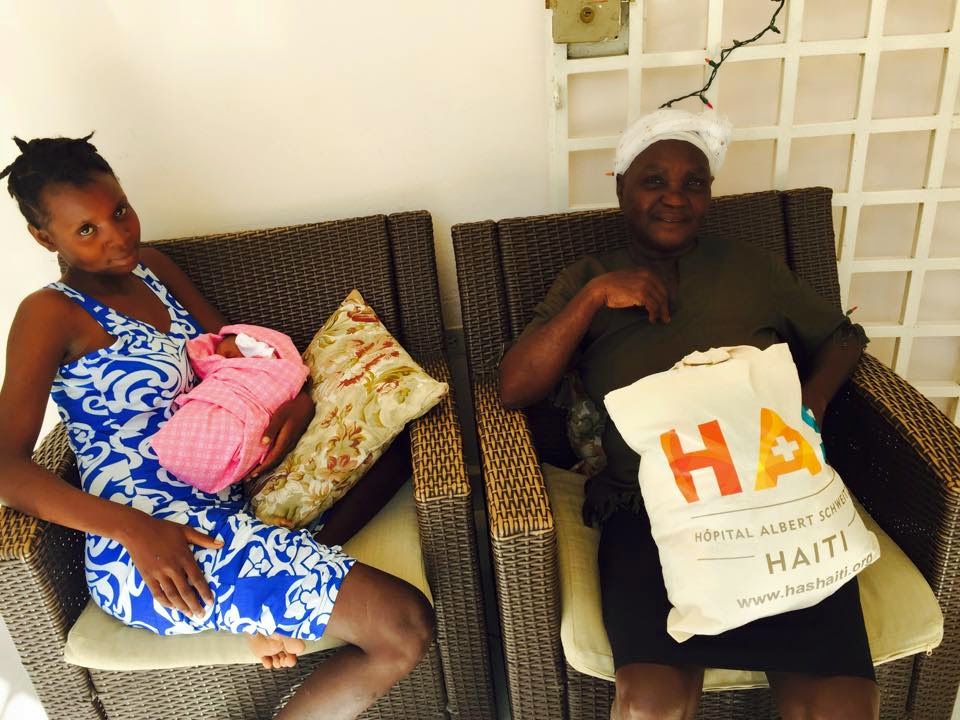 In the end, the pictures were taken and the mother and her grandmother taken back to the hospital to get some last instructions and teaching by Illa before going home. In the end, I was left thinking more about this mother than I thought about the photo shoot. I thought of the home she was taking this baby to- its dirt floor, its lack of running water, electricity, its meager food supply. I thought about the baby’s grandmother wanting to help so much but not having much but herself to offer. I thought about how much I love my grandchildren and want them to be happy and loved and safe.

I have also thought about Violet Horst who is a woman who is one of the 3% of people who survive a gleoblastoma, a dreadful brain tumor, for more than a year. I thought of all the love and grace she has brought to her students while teaching pediatric nursing and how her love reached all the way to midwives and mothers in Haiti while she wears electrodes attached all over her head to beat back the growth of the tumor. 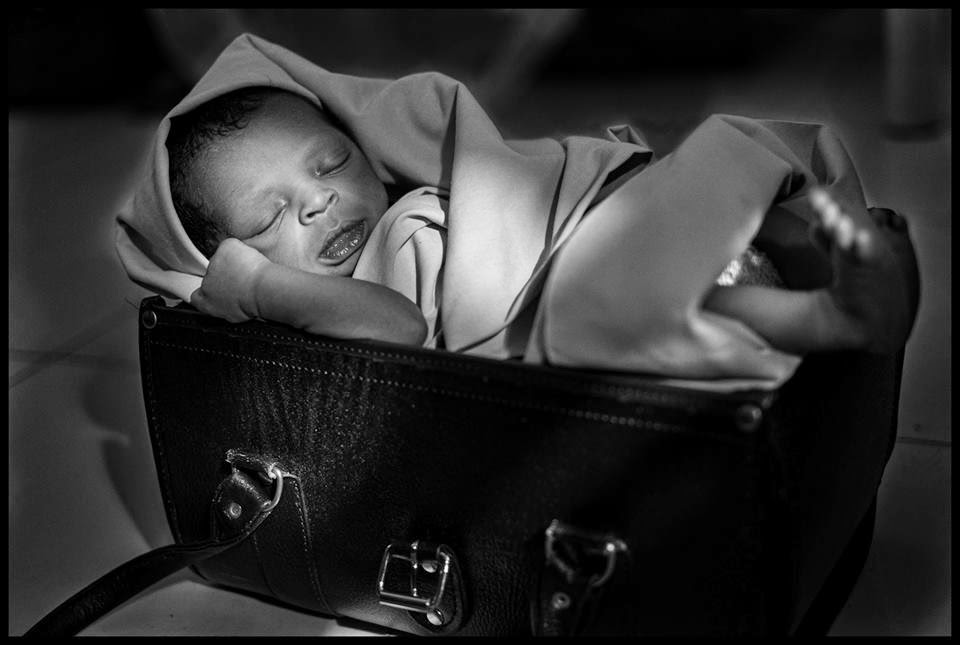 In the beginning it was about a picture of a baby in a bag. In the end, it was about women loving and supporting each other through the treacherous roads we travel. In the end, there was so much love in the house it was spilling out and we would never be the same. In the end, we were more inspired than ever to carry on Mary Breckinridge’s vision.

—Nadene Brunk, CNM and Founder of Midwives For Haiti