Bernard has been catching babies in rural Haiti since 1978, when he was 25 years old. His mom was also a traditional birth attendant, or matwòn, and one day a woman came to their house when she wasn’t home. “So, I delivered the baby. That’s how I began.” He’s 64 now. “I’ve delivered a lot of babies,” he says. 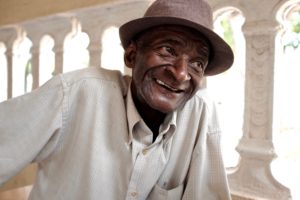 Bernard paid 50 gourdes ($.80) for a motorcycle taxi to the monthly Continuing Education session offered by Midwives For Haiti in Pondiassou. He came to report the numbers of births he did this past month (7) and to replenish his supply of Clean Delivery Kits. The group, led by skilled birth attendant and matwòn trainer, Genette Thelusmond, sing songs on recognizing danger signs in pregnancy, clean birth techniques, and promoting health in their patients. An estimated half of matwòns can’t read or write. “If you forget what to do,” says Genette, “just sing the song to remember.” 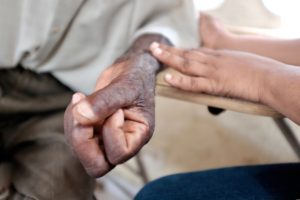 About 75% of births in Haiti happen outside a medical facility, into the hands of matwòns. About 55% of Haiti’s 10 million people live rurally, and most of these women live far from a hospital or medical provider (UNICEF 2012). They either can’t afford transportation to the hospital or feel more comfortable at home with a matwòn. Haiti also has the highest rates of maternal and infant deaths in the Western Hemisphere. About 98% of these deaths are preventable with access to skilled care.

A few years ago, Bernard completed Midwives For Haiti’s Matwòn Outreach Program, a special 5-month training offered to traditional birth attendants who have little or no formal training in midwifery or obstetrics. Their knowledge of pregnancy and birth is typically handed down through the generations and they are highly revered community leaders. Partnering with matwòns to help them recognize danger signs, and when to transfer care of a patient, has greatly increased the number of our referrals and saved many lives.

“The training helped me a lot,” he says. “I have learned many things. The women love me to deliver them so sometimes when I tell them they need to go to the hospital, they don’t want to go. But I talk to them and I go with them and stay with them there. There was one woman recently who delivered at home but her tearing was so bad and she was bleeding so much that we went to the hospital. She was so scared of the doctor and wouldn’t allow him to help her. I helped calm her down. Then the doctor killed her (used anesthesia) so that he could do the repair. Then she woke up and was much better.” 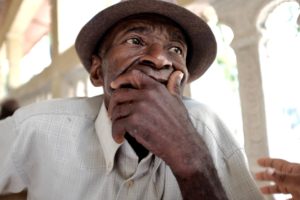 In addition to staying with their patients during a hospital transport, the Midwives For Haiti program encourages increased lines of communication with these wise men and women. Bernard did seven births last month, another matwòn did five, another six. Some of the moms they are delivering are as young as 15 and several transferred to the hospital. This is good information for Genette and our team to have, especially as we assess community needs and which villages might need to be visited by the Mobile Prenatal Clinic.

Genette asks about the matwòns that are missing at this monthly meeting. Why are they not here? It is too far for them to travel, someone says.

Bernard only had enough money for a one-way moto taxi here. Sometimes women can’t pay the 250 gourdes ($4) he charges for a birth but he helps them anyway. To supplement his income, he works as a farmer. Today, he will walk the 5 hours home. It’s a long way to go, but that’s okay with him because he now has a fresh supply of Clean Delivery Kits to safely deliver the mothers that might come to him this month. And that’s what matters most. 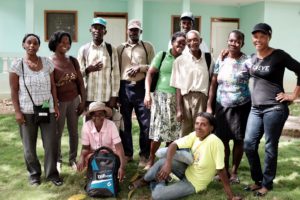 Special thanks to Bernard Forteus for his important work and for being so gracious to agree to an interview. For more info, please email saronson@midwivesforhaiti.org.

Learn more about this program in this 6-minute video by our friends, Every Mother Counts:

The Making of a Midwife Part 2 from Every Mother Counts on Vimeo.

Baby in the Bag