Midwives Eclide and Nelta will tell you- babies come when they want to come! Day or night, moms in labor turn up at the rural Carrie Wortham Birth Center seeking the skilled care, loving assurance, and medications the health center offers. Some moms walk for miles in the dark of night to reach the midwives while others turn up in the afternoon on the back of a motorcycle. However and whenever they arrive, mothers are received with loving arms and provided the highest quality of care in brand new facilities. The following are two birth stories from longtime volunteer midwife and friend of Midwives For Haiti, Patricia Haroldson.

“Darkness comes to Cabestor around 6 pm. A Birth Center midwife in Cabestor is on duty 24/7. We learned from them to hang our scrubs and our supplies on the end of the bed so you could jump in to them and go if there was a knock on the door. By 9 most everyone is settled in for the night. We all conserve the solar we have collected in the day by just not using it much after dark. If a woman comes in in labor in the night, that light is precious. Vida and I are campers and hikers so we are pretty comfortable with life by headlamp but not so much with going to bed early. By Thursday though, our internal clocks were on Cabestor time. Good thing because a woman arrived around midnight. She and her friend had walked
2 hours to get to us and by the time she arrived she was in very active labor. Michel and Nelta summoned us once they had her settled in. The solar power ran out and around 3am, a little baby boy weighing about 5.5 lbs , arrived and was greeted by the 4 of us in headlamps shouting for joy. He was immediately placed skin to skin with his mother to keep warm and started to nurse within minutes. No lacerations, no excessive bleeding and a vigorous baby!

It was a short night for everyone. The clanging church bells awakened us all at 5:30 announcing that the parish priest had arrived and Mass would be held. Day light awaken everyone anyway and so our last full day in Cabestor began. We hadn’t awakened the translators for the birth and they were surprised that a baby had arrived in the night. Women began to arrive and prenatal clinic begins. After all of the women are seen, we checked on Momma and baby. He had warmed up while snuggled next to Mom so we completed his newborn exam and began preparations for their return home. By midmorning, his Papa and older brother arrived on foot with food and met the newest member of their family. While holding his son he thanks us all and remarks on how important and wonderful the Birth Center is to the community. He tells us how before the Birth Center was open, he took his sister in law to Los Cahobas in labor and they sent her on to Mirebaleis because they were full. By the time they arrived, her baby died.

Michel will visit them in their home in 2 days for a postpartum visit and mom and baby will return the birth center in 1 week for another visit. I ask if I can take pictures and EVERYONE wanted to be in to the photos! A new and healthy baby is a celebration.”

This next story is rather difficult- TRIGGER WARNING– but this true account bears witness to the very real challenges mothers face in rural Haiti when there is limited access to reliable transportation, prenatal care, skilled providers, or medical facilities.

A Peaceful Day Ends In Emergency

“As we prepared for bed, we heard a lot of commotion outside. I looked down to see about 6 men carrying something supported by 2 long poles. It all was unfamiliar, then I realized they had brought someone to the Center. I ran down and asked if help was needed and Michelle said “Yes” with a worried look. I shouted to Vida and we changed quickly, grabbed my bag and went down.

The men had carried a young woman nearly 4 hours in the dark of night. She had been laboring all day and reported that her water had broken sometime in the early morning. She was completely dilated with the presenting part visible and having contractions with an urge to push. We checked for fetal heart tones and there were none. The presenting part was not a head but a limb- we were not sure by the appearance, if it was an arm or a leg. It was obvious by the appearance that the baby had been gone for some time. Nelta skillfully started and IV and I asked if there was any form of pain medicine. All we had was acetaminophen which would not be helpful. We asked about the possibility of transport but there was no car available. What to do?

The woman had been seen at the Prenatal Clinic the week before and was thought to be about 26 weeks. Dating is a challenge as people often are not at all certain about last period dates. One never is sure if dates are off or if a baby is small for age- especially with only 1 or no prenatal visits. If she was indeed 26 weeks, I estimated the baby would be about 1.5 pounds. Our alternatives were to try and turn the baby and deliver it vaginally or do nothing and continue to try and find transport to Mirebaleis. She was young, this was her 1st pregnancy- we had to try.

I withdrew the presenting part and saw that it was the baby’s left arm. I immediately saw that the baby was bigger than 26 weeks- maybe 4 pounds and was presenting in a really difficult way. The left arm was out, the left shoulder under her pubic bone, but the head was caught behind her pelvic bones and as she pushed, the chin extended back making delivery impossible. I tried to turn the baby and flex the chin down. We tried every position we could think of, we prayed, we tried, she pushed, I cried; but the baby was stuck. I cannot describe how helpless and desperate I felt, we all did. We kept shouting out to Frankie- we need transport!

Miraculously, a man with a car who often visits Cabestor and parks his car by Frankie and Louis’s house, had pulled in the last 30 minutes. We called Frankie, the “mayor of Cabestor” as he knows everyone and he got this man to agree to bring this woman to the Hospital in Mirabelle. Vida realized this young woman did not understand her baby had died and Louis, as Vida’s Creole voice, tenderly explained it all. We prepared her for transport and gave her clean clothes and a Days for Girls postpartum kit. Eclide rode with her.

We all stood, silently- sweating, exhausted, with tears – watching the tail lights move away. This was the most difficult obstetric presentation I have ever witnessed, yet I realized what might have been if the Birth Center was not here. A mother lives…” 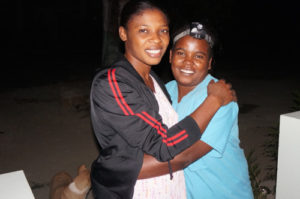 If you are interested in volunteering your medical skills and supporting our students and staff, please read more on our Volunteer Program. If you would like to help us fund the work being done in Haiti to make birth safer for more mothers and babies, please make a tax-deductible donation now.

You Might be Working for Midwives For Haiti If…. 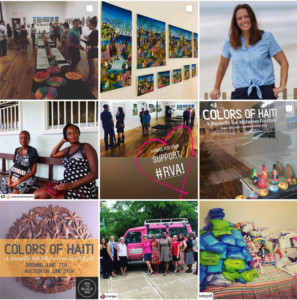