The students at the Nadene Brunk Eads School have been very busy in their classroom studies and clinical education since class began several months ago. The program is vigorous and challenging, but this group is definitely up to the task.

Since the inception of our school, we have graduated 9 classes- totaling 153 graduates! Having such a wealth of alumni is beneficial to our students and gives them the opportunity to have great mentors. One graduate, Escumè Claudie, visited the classroom this month with her 1 1/2 year old daughter Louis Claudjime Christmaelle. 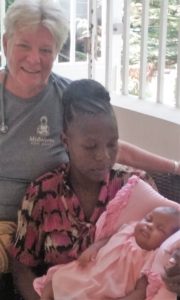 Escumè graduated with class 4 from the school in 2011. She now works at Hospital St. Therese, where she and her fellow MFH alums see hundreds of women a month. This job not only allows her to give essential care to mothers and babies, but also empowers her to support her family, including her baby and 3 older sons. Before her training at the Nadene Brunk Eads School, Escumè was frustrated by the level of care available in Hinche. “People don’t know how to care for women,” she said, “but Midwives for Haiti trained me to save lives.”

Escumè wanted to come back to the school with her young daughter to help the students during their newborn exam lesson.

Education Director Diane Rousseau was thrilled to have Escumè back in the classroom. “Everyone got a baby fix during newborn exam class today! A beautiful baby and a fun class,” she said. When it comes to newborn exams, communication is key. “Emphasis is placed on teaching the mother what the examiner is doing and why,” said Diane. Having a former student in attendance helped her explain the importance of connecting with the mother.

The students did not actually practice an exam on little Louis Claudjime Christmaelle. “That would be too much to ask!” said Diane. But having her around was inspirational for the students, and added a little fun to their rigorous curriculum.

With Escumè’s job at the hospital, she has a salary to one day send her daughter to school. Perhaps in the future baby Claudjime Christmaelle will also attend the Nadene Brunk Eads School and follow in her mother’s footsteps. For now we are accepting her honorarily as our littlest midwife! 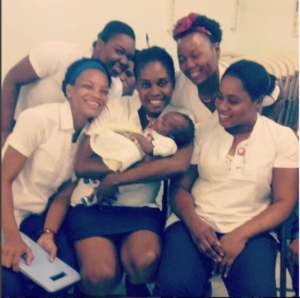 George Floyd: A Response from Midwives for Haiti 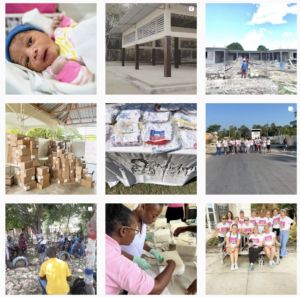